You are here: Home / seams / How to Sew Hong Kong Seams

Here is one technique in a 5-part series on how to finish seams.

Place fabrics RIGHT sides together. Stitch with the seam allowance called for in your pattern. The example is 5/8 in.

Fold the bias strip back over and press.

Fold the bias strip to the back side of the seam allowance.

Trim any of the excess bias strip from the back side.

The seam is finished after being trimmed.

*The products linked are all products I personally have used, enjoy, or are on my wishlist! Some links may be affiliate links. The affiliate links do not affect the price you pay, but they do provide a small compensation to me. I am a participant in the Amazon Associates Program. 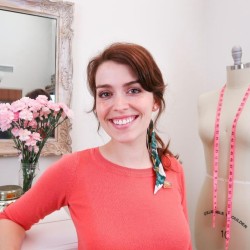 ...an elf who has achieved Master Tinker status. Give me a tool and I’ll make something! I am married to the coolest nerd and Mama to two girly girls.

My mission is to take the overwhelm out of projects, so you can go get creative and make something you love! a little more backstory…

"You crawl before you walk, you walk before you run." You thread before you sew. I tell people that sewing is just a collection of techniques strung ... END_OF_DOCUMENT_TOKEN_TO_BE_REPLACED

One of the most frustrating problems you may run into when learning how to sew is thread tension issues. The thread can be too tight and bunch up the seam or, ... END_OF_DOCUMENT_TOKEN_TO_BE_REPLACED

Selecting a Stitch Sewing machines can come with a large assortment of stitch options. You'll see some with *50 stitches, *110 stitches, *240 stitches, and ... END_OF_DOCUMENT_TOKEN_TO_BE_REPLACED

A first look at the future Paige Handmade sewing s

My @masterclass homework assignment: make a mood b

Happy birthday, Cowgirl! 🤠🐎👢 We are so bl

A first look at the future Paige Handmade sewing s

My @masterclass homework assignment: make a mood b

Happy birthday, Cowgirl! 🤠🐎👢 We are so bl

Two sweaters in 26 days. 💝 I love giving my dau

Slowly but surely a sweater grows. This sweater pa